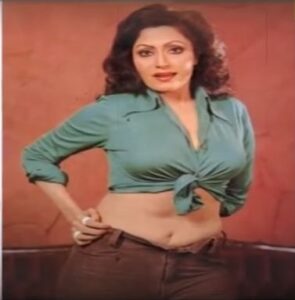 Bindu was born in Hanuman Bhagda Gujarat, his father’s name was Nanubhai Desai and he was a film producer and his mother’s name was Jyotsna. Bindu’s mother was a stage artist. she had seven siblings and she was the eldest among them. she had 6 sisters and one brother. Bindu’s parents kept her away from films and she was not allowed to watch films. Her father died when she was 13 years old, after which the responsibility of earning money fell on her shoulders.

she met Champaklal and Champaklal lived behind Bindu’s house and his sister was a special friend of her. When Champaklal’s family came to know Bindu’s love affair but even after this the love between the two did not diminish. In 1964, Bindu was married to Champaklal zaveri. Their marriage was celebrated for 3 days and after that Champaklal’s family turned away from them. Champaklal was evicted from his ancestral business. After this Champaklal left his home and started living with Bindu.

Bindu started modeling after her father’s death. In 1962, she got a chance to work in Mohan Kumar’s superhit film Anpadh Though she did not know Hindi, she only knew Gujarati but she learned Hindi language for this film. After this she did not get the film for some time, after this Bindu got married. After some time she met Raj Khosla. Raj Khosla offered her to work in films and the shooting of the film Mera Saya was going on and Raj Khosla called her for the screening test and at this point, she had gone through a lot of preparation for her screening test and she was selected for the film Do Raaste and The film proved to be a superhit. After this, Shakti Samant gave Bindu an opportunity to work in kati patang  film and this film also proved to be a super hit. After this she did many superhit films and she never looked back. she says, she has full faith in Sai Baba and her husband has been an important contributor to her career. In 1983, she became pregnant but she had to undergo an abortion after which the doctor advised that she should stay away from the dancing and film world. she got away from films for some time, but after some time she returned to the silver screen and did many films like Hero, alag-alag, Biwi Ho To Aisi.