Runway 34 Movie Review : Aviation film is rarely made in Bollywood industry but this time something new has been tried and this film is totally based on aviation. The film was released in Indian cinemas on 29 April 2022. 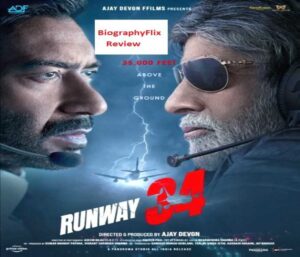 Ajay Devgn, Amitabh Bachchan, Boman Irani, Rakul Preet Singh, Aakanksha Singh are in lead roles in this movie. This movie is based on drama & Thriller. The duration of this film is 2 hours 25 minutes. Ajay Devgn has directed this film.

Very bad CGI was used in Ajay Devgn’s previous film Bhuj, due to which the film was badly affected but that mistake has been rectified in this film.  This film is related to aviation, That’s why plane visuals matter a lot in all such films although all these things are not taken care of in the Hindi film industry, but the plane visuals of this film are quite impressive.

The character writing in this film is not done well because when you watch the film, you will know that every character has been tied in a limited zone like Rakul Preet Singh is shown just panicking and crying throughout the movie.